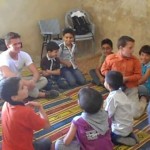 “The people [of Nablus] are unbelievably warm, welcoming, and ordinary, and that having a sister city affiliation with Boulder would be an extremely positive thing here.”

Hello to the members of the Boulder City Council!

My name is Heather and I am a student at CU Boulder studying International Affairs and Peace and Conflict Studies, and I lead the CU student group for the Boulder-Nablus Sister City Project. I have attached a video of myself because I would like to speak to you from Nablus to tell you directly that it is extremely safe here, that the people are unbelievably warm, welcoming, and ordinary, and that having a sister city affiliation with Boulder would be an extremely positive thing here. Nablus, like Boulder, already has a number of sister city affiliations with Lille, France; Nazareth, Israel; Dublin, Ireland; Como, Italy; Florence, Italy; Naples, Italy; Toscana, Italy; Poznań, Poland; Rabat, Morocco; Stavanger, Norway; Khasavyurt, Russia; and Dundee, Scotland. I believe that a sister city association between our city, Boulder, and Nablus would foster a tremendously beneficial relationship between the two very friendly cities, just as our other sister city affiliations have done.

I would also like to share with you a video I took of a bunch of Nabulsi kids in a refugee camp playing duck-duck-goose in a class I helped teach, to show you that they are just like children anywhere in the world and extremely adorable: http://youtu.be/yydxNMnhOWU

Strong and lasting friendships between people across the globe are a beautiful feature of the modern era and they emphasize the humanity in each of us, serving as a powerful force for understanding and global peace. I urge you to support the movement to make Boulder a sister city with Nablus.

Thank you again for your time. I hope you are having a wonderful summer.

Children in a Refugee Camp in Nablus Playing Duck-Duck-Goose