“Nablus Was The Center of Everything” 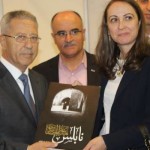 Daryl Meador: Can you speak a little bit about your history and relationship with Nablus and architecture?

Naseer Arafat: It’s the city where I live; I was born here. The relationship with architecture was built by the stories I got from my parents. They lived in a big house, 675 square meters, three floors; it was demolished by the British in 1938. So not only my parents, but my aunts and uncles from both sides were all living together in that house. My aunt, whenever the house was mentioned, she would sadly remember the moment when, with her hair wet, she was tossed out of the house into the street, and the British blew it up.

Also, my father’s uncle all the time spoke about the visitors who would come to the house because he was selling costumes and clothes out of it. Visitors would stay in the guest part of the house for three days, fed and hosted.

So that memory of the place, of the building, made me always imagine the size of the house and the situation of my family in it. I sadly connected this with loss, especially because where I live now is in a house that is in the garden of the old house. The old house is partially now a garden and partially a street where I used to walk every day. I would imagine which part of the house I was walking on. So that was the passion towards an ancient house and what it meant to my family.

I studied architecture at Birzeit, and volunteered to bring visitors to the university on tours in Nablus. After that I worked as an architect responsible for the national register of historical buildings in Palestine. This enabled me to discover Nablus as a treasured place with an urban fabric, with monuments. This was not known to me before. The more I worked in the city, walked through the alleys and streets, I discovered the richness of it.

Then as I worked, I decided I would write something about the city. I started collecting data and photographs, maps — whatever I could collect on the city.

DM: What kind of resources did you use?

NA: At that time I went to the Rockefeller museum in Jerusalem and saw documents and old photos of Nablus. Later I went to study restoration at York University and I visited what is called the Palestine Exploration Fund, which is a small association off Oxford Street in London. There I found huge old photographs of Nablus printed on glass.

I managed to collect unique photographs from the Ecole Biblique in Jerusalem, which is the French antiquities school. I managed to collect photos from Istanbul, the archive of the Sultan Abd al-Hamid II, from Berlin, the antiquities department and the Mandate Museum in London. At all these places I could find old photos of Nablus and use some for the book.

I also collected family photos. From some families you have photos of their houses and there was an Austrian researcher who came to Nablus in ‘96, and took photos of all of the houses in Nablus. So I managed to find some photos of houses destroyed by the Israelis in 2002. This was very emotional for the people whose houses were lost.

Two soap factories which were demolished, I managed to find photos of these as well. And by chance I was able to survey one factory before it was demolished, so its plan and façade are in the book.

DM: Does the book discuss the Israeli invasion and destruction?

NA: Yes it does. What the Israelis are doing to Nablus and the old city has been continuous since the occupation started. So the book is not just architectural; it starts with an architectural description, but also has social, political, economical, cultural interpretations of the buildings described. This is, I think, what makes the book special. I am an architect, so the starting point of my research and writing was architecture. But architecture is just a building, and it is a rigid description to just talk about the look and materials of a building. I felt that the richness of the building is the social life of the building, maybe the economical life of the market, also the cultural livelihood of the fabric.

So whenever there was a linked story to a building, I never hesitated to write it.

DM: And how did you find the stories?

NA: From people. Especially elderly people, I interviewed many of them. And they told me real stories.

DM: What are some examples of the personal stories linked to buildings?

NA: There are so many — one of them is about a mufti, he had the highest seat in Islam, who was from Nablus, appointed by the Ottomans. The British commander in Nablus wanted to meet the community leaders in Nablus. This man made an appointment to meet the sheikh. The reception is always downstairs and the house is above, all the time. So he gathered community leaders of Nablus to meet the guy, and when they were waiting, the mufti was nervously walking and not relaxed. People were asking what was wrong with him. All of the sudden, he went upstairs to his house.

The people were surprised because this is not the way you receive your guests, but they couldn’t have a word with him; he was upstairs in his house. The British commander came, they called upon the mufti and he came down and had a chat and the people left.

But the Nabulsis still didn’t understand, and they asked the mufti why he did that. He said, “Guys, if I was sitting and waiting for the guest, when he came I would have to stand up to respect and welcome him. But I went up, and when he came I came down to him, and he stood up for me. That’s how we should receive the occupier.”

Another story that is very nice is related to what we call in modern times, gender-sensitive issues. In one of the Turkish baths, if you look at the sides of the main hall there is a higher stage where people sit. When I surveyed this in 1992 — I was a student then — there used to be couches, fancy and relaxing seats, not like the stones on the other side. It indicated that this was a special place for people to sit.

She told her husband, and as the story goes he slapped the table, and he said “I will show them.” What can we expect from the most powerful person in town? He built a special bath for his wife. And he built a tunnel in between his house and the bath so that the bath is only reserved for her, and so that no one can see her when she leaves.

DM: Does the bath still exist?

NA: Yes, and it’s called al-Qadi; it means “the Judge” bath. It is used as a sweets factory now, not as a bath.

An inscription on the Ottoman clock tower in Nablus’ old city.

DM: The book features poems that are inscribed on buildings in Nablus. Are those common on all historical buildings?

NA: Every monument in Nablus, and some of the houses, have a written inscription which most of the time is a poem. This poem is the most honest documentation of the building date. So I managed to read some, [and] copy what others have read from what were lost.

From the poems I could calculate when the building was built. In Arabic, every letter has a corresponding number — alif is one, bais two, etc. So if you take the letters of the last phrase of the poem, and you find the equivalent number of each letter and sum them up, you get the year that each building was built. It is a brilliant way of writing a poem.

DM: And they are included in the book?

NA: All of the poems are included with a photo and a copy of the text of the poem.

DM: Can you say one final thing about why Nablus is unique, historically and architecturally?

NA: There is a lot to say about Nablus. I would say that Nablus, at the time that it was built as an Islamic city, during the Mamluk Ottoman period, it was the center of everything. It was the capital of trade. The city was well known for its powerful economy that attracted not only the plans for making the olive oil soap from Jordan, but also the costumes that were exported to Europe and exhibited during the Ottoman period.

The fields of Nablus were where olive trees and cotton plants were planted, because we have four water springs and cotton needs a lot of water.

Also, it was the center of science. Students from Azhar [University] in Egypt would come study in Nablus. There were four schools in the old city of Nablus.

In modern history, before Israeli occupation, there were four buses leaving Nablus every morning — one toBeirut, one to Damascus, one to Jerusalem, and one to Amman. Every morning. My father used to say he would arrive in Damascus before shops opened. The Hijaz train, which took pilgrims from Palestine, Jordan and Syriato Saudi Arabia, started from Nablus. So I could say simply, Nablus was the center of everything for the neighboring countries. You could say it is a unique city.

Daryl Meador is a recent graduate of the School of the Art Institute of Chicago who is currently living and volunteering in Nablus.