Day One: Arrival and planting 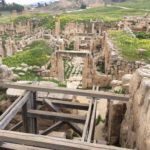 Upon arrival we trickled into a lovely hotel right across the street from the great amphitheater in old town Amman. The rooms are cozy and one feels as if they are hanging out on the balcony of a really happening spot! The amphitheater stays lit up all night and casts a glow into our rooms.

To seed ourselves, planting our energy and commitment to our endeavors we decided to be tourist for the day and took a van up to Jaresh. After many roadside stops for fresh fruit, Kahwa (Turkish coffee) bottled water and “Look! Camels! Or goats! we arrived at the ruins. Jerash is an ancient Roman city with an 800 meter long “boulevard” complete with columns, theaters, bathhouses and all manner of structures of ingenuity including a stone cutting machine. So amazing are the ornate carved capstones on the columns and smoothed out ruts left in the large paving stones from chariot wheels that most of us became mono syllabic with “oohs and ash and wows!”

We went from there to the city of Ajloun, where we took in Salahadin’s castle and had a big midday dinner and hike at the Ajloun Nature preserve. They’ve built the cutest little eco lodges with solar water tanks on the rooftops for bed and breakfast stays. Our desire was to walk in nature. Here we are playing in the trees

The most magical part was the fact that the mountainside was a bloom with all sorts of flowers, it was fun identifying the varieties like iris, poppy and ladies slippers, as they are not like the same varietal in Colorado.

Everywhere we went children, teens and adults greeted us with smiles, asked to take our picture with them! Even when we might say something to distance ourselves from the current political rhetoric of our nation’s leader, we were met with acceptance and an assurance that we are not that.

Several times when said, “we love Jordan!” The reply would be, “Jordan loves you!”